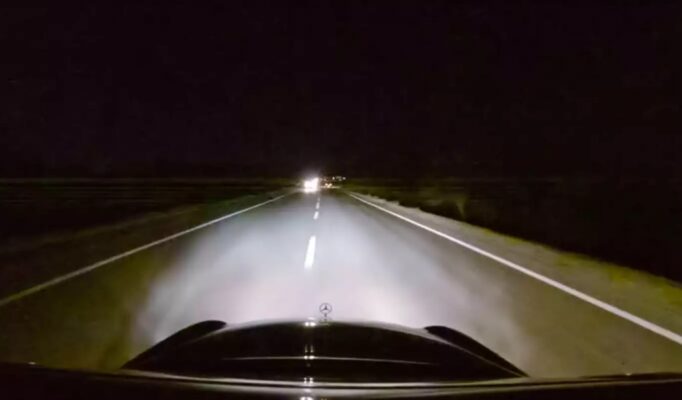 Which headlight is better: LEDs, halogen or xenon?

At first, LED headlights were only available for premium brands, but over the past year or two the new technology has made a breakthrough and began to replace xenon light from the list of optional extras even in mid-priced cars. Is it deserved?

To check it up, we have equipped four cars for a night test on Dmitrovsky proving ground. The first pair – Nissan Tiida hatchbacks: one with halogen headlights, and the other with LED headlights. And the LEDs are non-adaptive and are used only in dipped beam.

And also – two sedans Mazda 6. After the recent restyling, the “six” has replaced the bi-xenon swivel headlights with fully adaptive LED ones. So we took the new car and the pre-reformed one: let’s see if there is any progress.

If the light flux meets on its way some surface, it gets the illumination, measured in lux (lx). We took a luxmeter “Ecolight” SFAT.412125.002 and on a 200-meter test section of the road we measured the illumination at different distances. In addition to measurements, the results of which are summarized in the table, to assess the light distribution will help pictures taken from the same angle. No figures can convey what the eyes see.

The first to the 200-meter “ruler” of cones with reflectors is the most modest participant of the test – Tiida with halogen light. It showed the expected and unremarkable result: the spot of warm yellow color loses the person dressed in darkness on the right curb already at a distance of 50 meters at low beam and at a distance of 120 meters when switching to high beam. This is our starting point.

Tiida with expensive equipment comes to the starting position: LEDs flash with white light and… Silent scene. The newfangled LEDs shine along the lane for a distance of only 25 meters! Due to the specific shape of the beam a pedestrian in dark clothes can be seen on the roadside in the LED dipped beam at a distance of 40 meters. The loss to halogens is not so big, because the LED beam is better “shooting” the curb, but still a loss! We should remember the dawn of motorization, when a man with a red flag was in front of the car to warn of the approach of an unprecedented self-propelled carriage.

The bi-xenon optics immediately made it clear that our 200-meter “ruler” would not be enough for it. Near the last mark the device caught the lux even from the dipped headlights, and the distant one even illuminated the forest 320 meters away from the car. “Tared” pedestrian disappeared from view at a distance of 60 meters in dipped beam mode and 120 meters in high beam mode.

And the LED headlights again puzzled. The picture is not as disastrous as with the Tida, but similar: the border of light and shadow is noticeably closer than in the case of xenon, and its near part is exactly in the traffic lane, and the roadside is better lit. The experiment with a man confirmed the first impressions: the visibility limits for a pedestrian dressed in black are 55 and 110 meters, which is worse than xenon indicators. So, that is the new technology.

I WILL DRIVE THE LIGHT!

Let us back up our measurements with subjective impressions from driving.

In the case of Tiyid, the halogen lights do their job quite well and allow driving quite comfortably at the permitted speeds outside the city. However, driving with LED headlights is unpleasant and sometimes even dangerous, primarily because of the strange distribution of light. LEDs beat strongly along the right shoulder and a little bit capture the oncoming lane, but right in front of the nose they cut quite a significant part of the light beam – probably not to dazzle the driver of the car in front.

Taking care of your neighbor is a good thing, but not to your detriment! You don’t always follow someone.

Moreover, the border of light and shadow is very sharp and it is impossible to see anything behind it – as if a curtain was lowered in front of the car, and 25 meters from the bumper. At such, to put it mildly, a modest range other advantages of LEDs (for example, a more familiar to the eye color of the light beam) come to naught. The boundaries of the light area are significantly expanded when you switch to high beam – or rather, additional sections with a halogen bulb light up. But you can’t keep it always on – you will dazzle oncoming traffic. In addition, the two-color beam (white from the LEDs and yellow from halogens) quickly tires your eyes.

But not everything is simple in a Mazda! At low speeds the LED dipped beam also loses to xenon, although the electronics is able to rebuild the shape of the beam depending on the road conditions.

Benefits from the smart control system, you feel only at speeds above 40 km / h and the absence of other cars in sight: automatically turns on high beam, stopping at once all the talk about the lack of efficiency.

When approaching passing or oncoming cars, the LED headlight does not turn off the high beam completely, but only dims some sections so as not to dazzle other drivers – a dark rectangle is cut out in the beam of light, in which the oncoming car looms.

Relying on the data from the front camera, the electronics plays with the beam shape quite clearly. Only in a couple of cases, it mistakenly dimmed the lights, mistaking the oncoming car’s headlights for a bright flashlight.

Xenon headlights pre-reform Mazda shine better, but they can not dim the light, and therefore oncoming traffic and overtaking have to manually switch from high beam to low beam and back. That is why with slightly worse parameters of the light source we rate the LED headlights of updated Mazda 6 higher than the old, gas-discharge lamps.

“Peek” in the corners is able to both Mazda lighting, but no significant difference in the clarity and speed of operation, we did not notice either on special roads, or on the public roads.

IN LIGHT OF WHAT’S TO COME.

The conclusion is ambiguous: I simultaneously vote for LEDs and against them. It is obvious that in inexpensive cars without electronic control of the shape and brightness of the light beam, LED headlights lose to standard halogens.

In case of Tida, overpayment for cool LEDs is seemingly modest: for 27 thousand rubles you get advanced headlights, safety shutters, cruise control and a couple of decorative little things. But – here’s the paradox! – You get worse light.

And in cars of middle and higher price segments, smart adaptive headlights not only skillfully hide shortcomings of semiconductor light sources, but also make night travel safer. We’ve been convinced of this before in other expensive cars. It is worth to get in touch with high technologies for the sake of it.

They are not cheap yet, but the option itself when buying a new car is valued about the same as the “old” xenon.

The future lies in multi-functional headlights that automatically create a beam of light depending on speed, weather conditions, road profile and the presence of other cars. A complex of devices is responsible for light distribution: rain, speed, steering angle and suspension position sensors, windshield camera, navigation system.

The first effective adaptive lighting (1) was made on the basis of bi-xenon headlights. A shutter drum installed between the lamp and the lens is responsible for changing the light distribution. Rotating on the horizontal axis, it occupies one of several fixed positions, each of which forms the light beam. This is how you get urban, suburban, mainline and other lighting options. Later, engineers decided to use mainly high beam, and to fight dazzle with the gradual lowering of the lamps.

LED technology has opened up new horizons. The headlight (2) has several LEDs, each responsible for a different segment of the road. So you can shade individual sectors, leaving the rest of the space illuminated.
The most advanced, complex and expensive are the so-called matrix headlights (3). Each light source, counting in tens, is responsible for a particular sector. In the headlamp has no rotating elements to regulate the light beam – LEDs are firmly mounted on a fixed board at certain angles relative to the horizontal and vertical axes, and the algorithms for turning on and adjusting the brightness are given by the program. Since LEDs quickly fail at elevated temperatures, the headlights necessarily provide forced cooling system – with microfans and additional ducts for precise distribution of air flows. 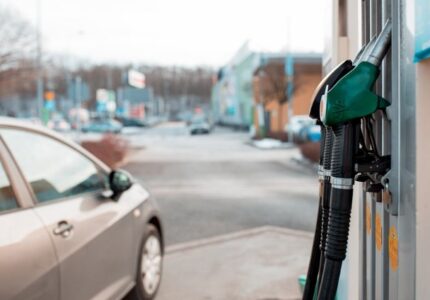 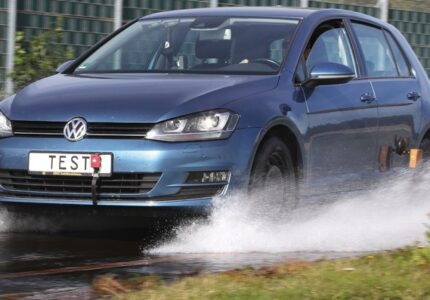 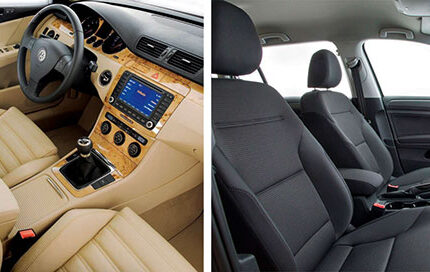